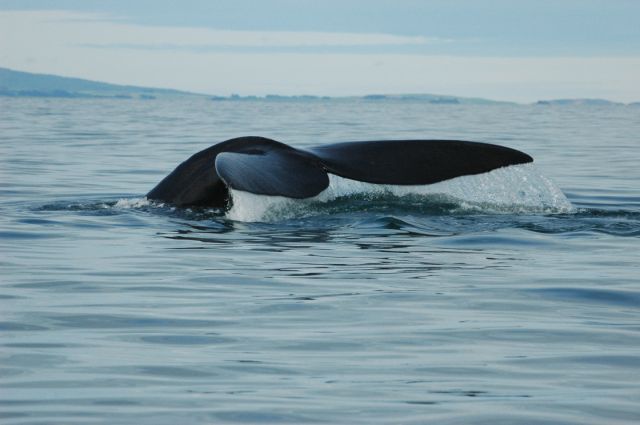 This pilot study is a first glimpse of where today’s Tohorā go to feed in summer – and it shows a startling change from the whaling era. With only 2 of probably 2,000 Tohorā tracked, we need more information to understand how often the new and old feeding grounds are used. Live Ocean is helping to fund this important research being done by the University of Auckland.

Tohorā are a remarkable conservation success story; from a low of perhaps 40 whales in 1920 around New Zealand, there were an estimated 2,000 in 2009. Stopping the hunting and protecting their key wintering ground of the Auckland Islands / Maungahuka has given Tohorā a chance to recover. There are hopes they can regain their pre-whaling abundance of 30,000 whales. Changing ocean surface temperatures markedly impact their food sources. How much can we use historical records as a guide to where tohorā travel, particularly as the rate of environmental change accelerates? To help protect the whales further, it is important to understand changes in Tohorā migrations.

A recently published pilot study involving researchers from across Australia and New Zealand used satellite tags to understand where Tohorā go in the nine months of the year they are not in Maungahuka. Tohorā, like many marine species, show strong loyalty to migratory habitats; where they feed in summer and breed in winter. These migratory traditions, often learned from their mothers during their first year of life, help the whales find vital resources in a vast ocean.

The tagged Tohorā visited what is called the ‘subtropical converge’, south of Australia. This is where warm water from the tropics meets cool water from the Antarctic. By concentrating prey like plankton and fish, this convergence creates a reliable banquet for whales, and also penguins, albatross and seals.

One went directly to the subtropical convergence, as you can see by its path coloured by month (image modified from Figure 2, Mackay et al 2020): 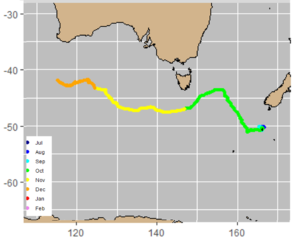 The other Tohorā checked out the South Island before heading to the subtropical front (image modified from Figure 2, Mackay et al 2020): 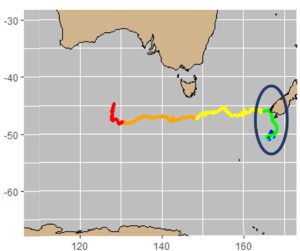 This pilot study only tracked voyages of 2 of 2,000 whales, but it raises the question: have Tohorā forgotten their traditional migratory routes to foraging grounds east of New Zealand?

A new collaboration between the University of Auckland, the Cawthron Institute (Nelson) and NOAA (National Oceanic and Atmospheric Administration – Seattle, USA) will follow up on this work by combining ‘next-generation’ satellite tags to directly track the Tohorā’s journeys, with microchemical markers in the whale’s skin that can indicate where they feed, to understand today’s Tohorā voyages.

Hopefully, Tohorā can continue to learn from each other and their environment to find new and more productive foraging areas. Building these new traditions will make them resilient under climate change, but they need our help. Satellite telemetry will help us understand and protect their migratory routes and summer feeding grounds, supporting the population to recover further.

Emma Carroll is a Royal Society of New Zealand Rutherford Discovery Fellow at the University of Auckland and is co-lead of the International Whaling Commission Southern Ocean Research Partnership theme on southern right whales. She weaves together different tools, approaches and collaborations to answer questions about the recovery and connectivity of marine mammal populations in a national and global context.